Hosted by the American School of Paris 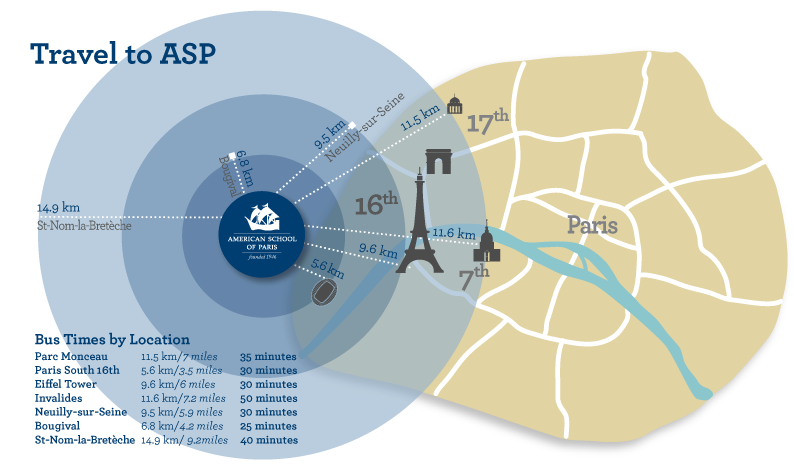 Link to Google Maps: The American School of Paris

If you are familiar with driving in the Paris area: At Porte de Saint Cloud take Route de la Reine and continue straight. At the roundabout at the end of the road, take the third exit, direction Pont de Saint Cloud, and cross the bridge. At the other side of the bridge there is a major junction: Continue straight ahead (going under the highway overpass) and take the D907 direction Vaucresson and Garches and climbing up a steep winding road (rue Dailly which becomes in turn rue Gounod, rue Pasteur and finally Boulevard du General de Gaulle).
Continue straight until you reach the SNCF Gare de Garches/Marnes la Coquette. Take a left turn and return back along the way you have just come in the direction of Paris. Turn right into ASP opposite number 86 Boulevard du General de Gaulle, just before rue Gustave Lambert.

Take the metro line 10 and go to the end of the line (west) to the Pont de Saint Cloud.

Take the exit from the platform marked Musee d’Albert Kahn and the Pont de Saint Cloud and walk two minutes in the direction of the bridge to the bus stop.

Take bus 460 and get off at the stop called "Gustave Lambert" (about 15-20 min) and the school entrance is on the other side of the road.

You will need one carnet ticket for the metro ride, and another for the bus ride which you must validate yourself in the machine located near the bus driver.

Take the SNCF suburb train from the St. Lazare train station in Paris or from La Defense. Take the train in the direction of St. Nom la Breteche and get off at the Garches-Marnes la Coquette train station.

Coming out of the station, you turn right and walk down the main road for about 5 minutes. ASP will be on your right hand side across the street from the rue Gustave Lambert.

Did you know that the word “volley” in Volleyball comes from the late 16th century French verb volée, which is based on the Latin origin volare?  You’ve already started to ask the next logical question: what did this word first mean when Europeans used it?

Volare is the verb “to FLY,” and today we use it in French (se voler) in the same manner.

When I first thought of this, I immediately began making associations to great aspirations of the human spirit and then to so many historical achievements (the Wright brothers, NASA’s mission to the moon, Charles Lindbergh, Amelia Earhart). And this is the beauty of language and history—words can be so rich that they can be treasures in many different ways.

And now you can take extra pride as a volleyball player (or coach, parent, spectator) that this game that you love is associated with the wonders of flight.  In fact, it was at the first official demonstration of the game in 1895, when sports directors saw the ball flying through the gymnasium, that they thought it should be called Volleyball (instead of Mintonette, which it was originally named by its inventor William Morgan).  Starting tomorrow—here in Paris, 123 years later—we will all see many volleys in our 2 gymnasiums, and balls will be flying and soaring through the air with cool spins, with grand souplesse, at great speeds, and we will all be filled with wonder and joy!

In addition to the sport’s rich linguistics context, it has experienced tremendous development and growth during its history.  Invented in America, Volleyball today is one of the big 5 international team sports and FIVB is the largest international sports federation in the world, and it is played on every continent and in practically every corner of the world.

Teams at this 2018-19 championship in Paris highlight this worldwide appeal, as our Division 1 cadre includes teams that come from neighboring countries such as Germany and England and those who have traveled much farther from Egypt and Greece.  5 different nations of schools are represented here, but even more impressive is this fact: participating are students of 24 different nationalities who come from Argentina, Brazil, Australia, Belgium, Canada, China, Czech Republic, England, Egypt, France, Germany, Greece, Hungary, Indonesia, Iran, Ireland, Italy, Kazakhstan, Malasya, Netherlands, Republic of Korea, Romania, United States of America, Venezuela . . . WOW!  Our conference championship truly is an excellent illustration and symbol for the great sport of international volleyball today.

With those thoughts in mind, I wish you the best of sporting experiences in the coming days and the greatest success for you and your teams.  ASP is honored to welcome you and we look forward to seeing you soar to new heights!

The maximum number of players (including Managers) per team will be ten (10).

The 2018-19 Boys Division I Volleyball Championships comprises 7 qualifying teams and 1 invitation team (ASPJV has been invited to be the 8th team); this will be played as an (8) team tournament.  There will be a complete round robin format followed by a straight playoff for positions. All round robin matches are best-of-3 sets and all playoff matches are best-of-5 sets.

A precise record of all Yellow and Red card offences should be kept by the Tournament Director. The Tournament Director is responsible for keeping totals throughout the Championships. Any player sent off or ejected in a Championship game is ineligible to play in the following game (i.e. the player is ‘banned’ for one (1) game following the sending off). Two (2) Yellow cards in separate games do not result in suspension from the next game (i.e. the cards do not become Red).

Tie-breaking Procedure in Flight Play
In the event of two (2) or more teams having the same win-loss record at the conclusion of Flight play, the tie will be resolved according to the following:
If more than two (2) teams are tied then:


When at any point in the tie-breaking procedure a three-way tie becomes a two-way tie, the head-to-head result between the tied teams will determine their placing in the standings.

Warm-up Time
The pre-game warm-up is a guaranteed 15 minutes. If the previous match ended early, the next match will start as scheduled. If the previous match ended late, the 15-minute warm-up is guaranteed. The warm-up is divided as: 7 minutes on floor, 3 minutes attack left, 3 minutes attack right and 2 minutes serving.  The toss for the match will take place 15 minutes prior to the start of the game (i.e. immediately before warm-up). The host school shall provide a minimum of six (6) balls for the warm-up period.

Promotion/Relegation will be 1 up and 1 down.

Akbar Khan Memorial Award: Outstanding Player - Division 1 Boys Volleyball
Akbar Khan coached the Varsity Boys Volleyball team at TASIS (The American School in England) from 1977-2004, and he soon became a popular figure amongst the ISST coaches and players.  A man of considerable stature, Akbar was wise, sensitive, charming, and he possessed a wonderful sense of humour.  He was an inspirational and charismatic figure on the courts throughout the ISST circuit, and a powerful and positive influence during the formative years of ISST volleyball.

When Akbar died suddenly in February 2005, he left a void, which will never be filled.  For that reason, the ISST honours his memory and recognizes the considerable contribution that he made to the sport of volleyball with this award to the tournament’s outstanding player.  The recipient will be a talented player, a young man who has made a major contribution to the team, but someone who also has an awareness of the place of true sportsmanship and respect for opponents and officials, thus will Akbar’s love of volleyball be perpetuated in the spirit of this award.