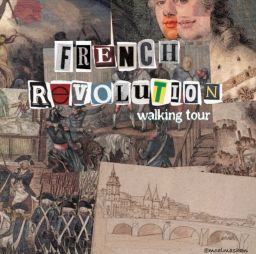 Paris and the French Revolution

Each year, our Grade 7 students study the French revolution, but this year, they blended digital mediums and real-life experiences to create both a walking tour and an accompanying podcast, interactive map, and series of websites explaining the historical significance of iconic locations in Paris. Grade 7 Social Studies teacher, Mr. Blakeney, shares his reflections on our student's tremendous work! Make sure to check out their podcast on Spotify, and enjoy a walking tour through Paris from wherever you are. 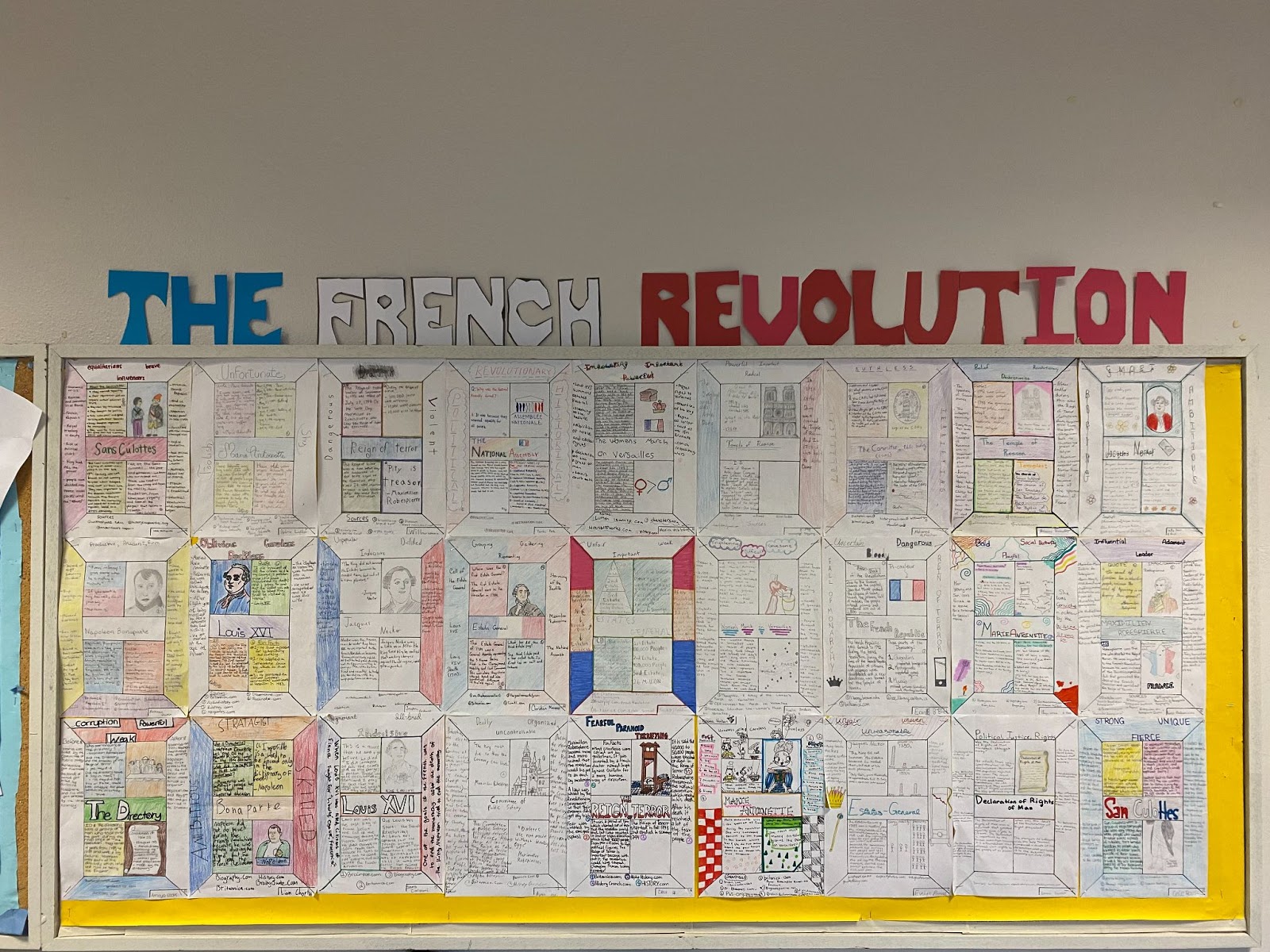 A few months ago I asked one of my classes if anyone had ever been to the Conciergerie. I was met with blank stares. "You know, it's the place on the island in the middle of Paris with the clock on the side of the wall." Nobody recognized this iconic building, and I received more than a few more confused looks. I started thinking about ways I could incorporate the geography of Paris while teaching the French Revolution, and introduce my students to some of the historically significant locations in Paris, whether they'd lived here all their lives, or just recently arrived.

This desire to see and understand our city has turned into a podcast series (of nine significant locations)
the French Revolution Walking Tour, an Interactive Map using Google Earth, and webpages. The podcast was designed by students, for families visiting Paris.

The students were actively engaged in each step of the process. After a brief introduction, they were asked to create a One-Pager (pictured below!) on some aspect of the French Revolution. Once complete, students presented their One-Pager while the rest of the class took notes. 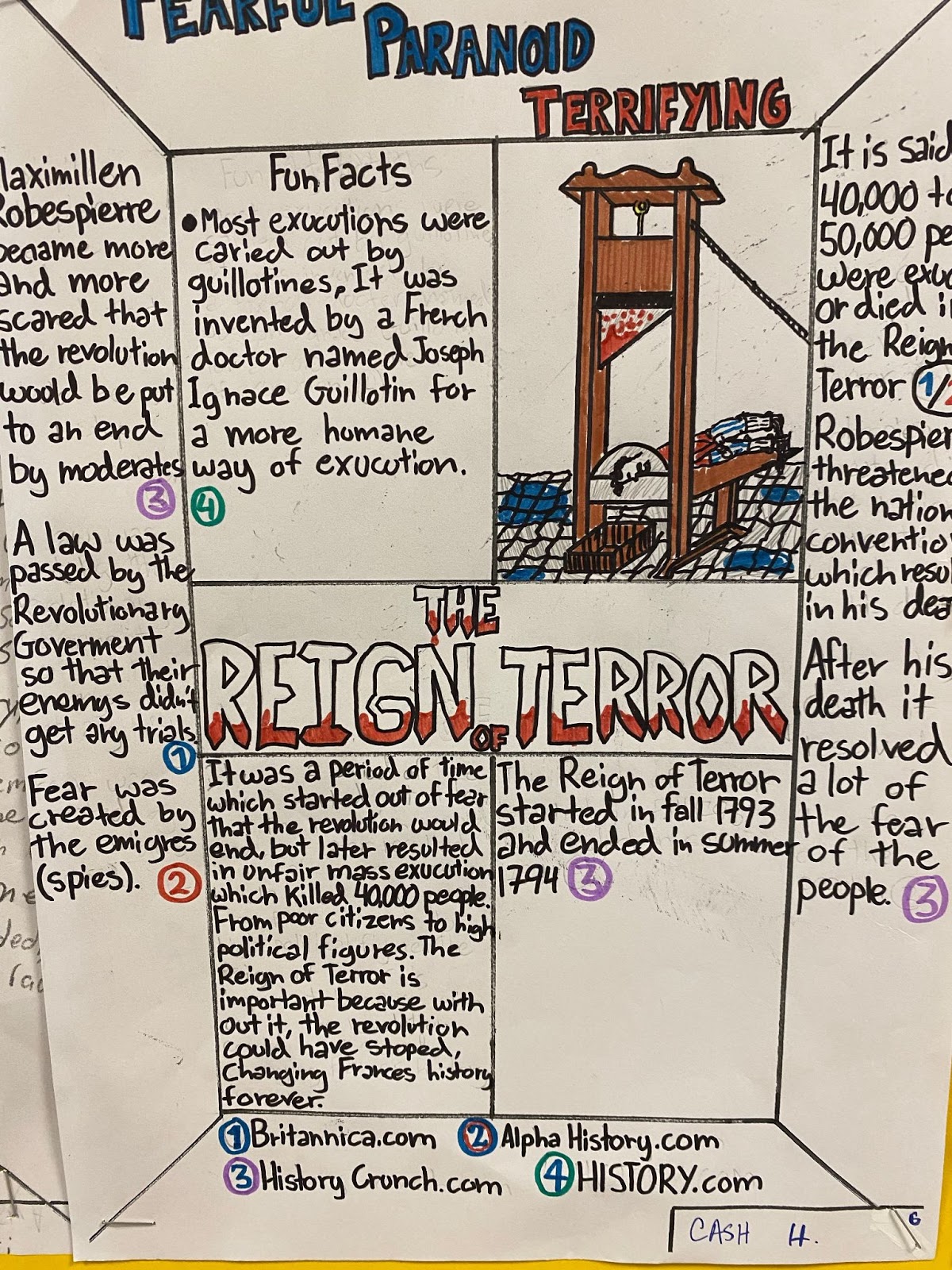 Now, the kids had some decisions to make. Each class created a walking tour, and the students worked together, discussed, debated, and eventually voted on seven to nine locations that could encompass a French Walking Tour. Unfortunately, some locations like the Chateau Versailles and The Temple were eliminated due to their distance from other locations. 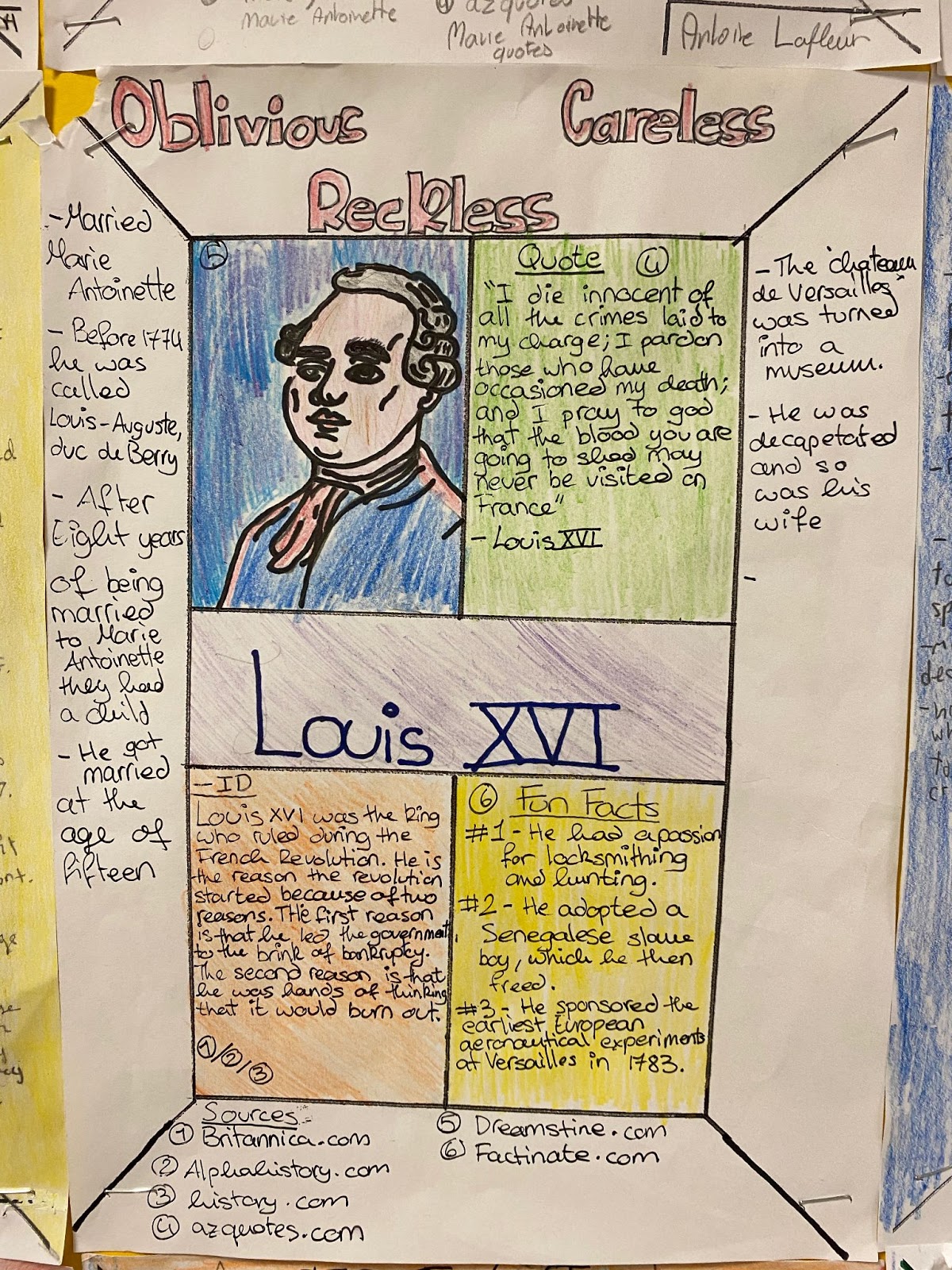 Now that we had a route and locations, students chose whether they would like to work on a podcast emphasizing the writing process, an Interactive Map emphasizing geography skills, or a webpage emphasizing digital design. Students worked in groups of three to research their location in relation to the French Revolution. If students from other classes chose the same location, this information was collated into a research document that included a wealth of information, allowing the groups to collaborate between different class sections. Most of the documents contained ten to twenty pages of student notes with sources and photos, paintings, or artifacts related to the location.

In the final stage of the project, students used their knowledge of the location as well as the collated notes to create a podcast, interactive map, or webpage dedicated to just one location. In addition, a voluntary contest was held to create a cover for the podcast. All four submissions were fantastic however, there had to be a winner. Congrats to Mohamed A. for his creative design! 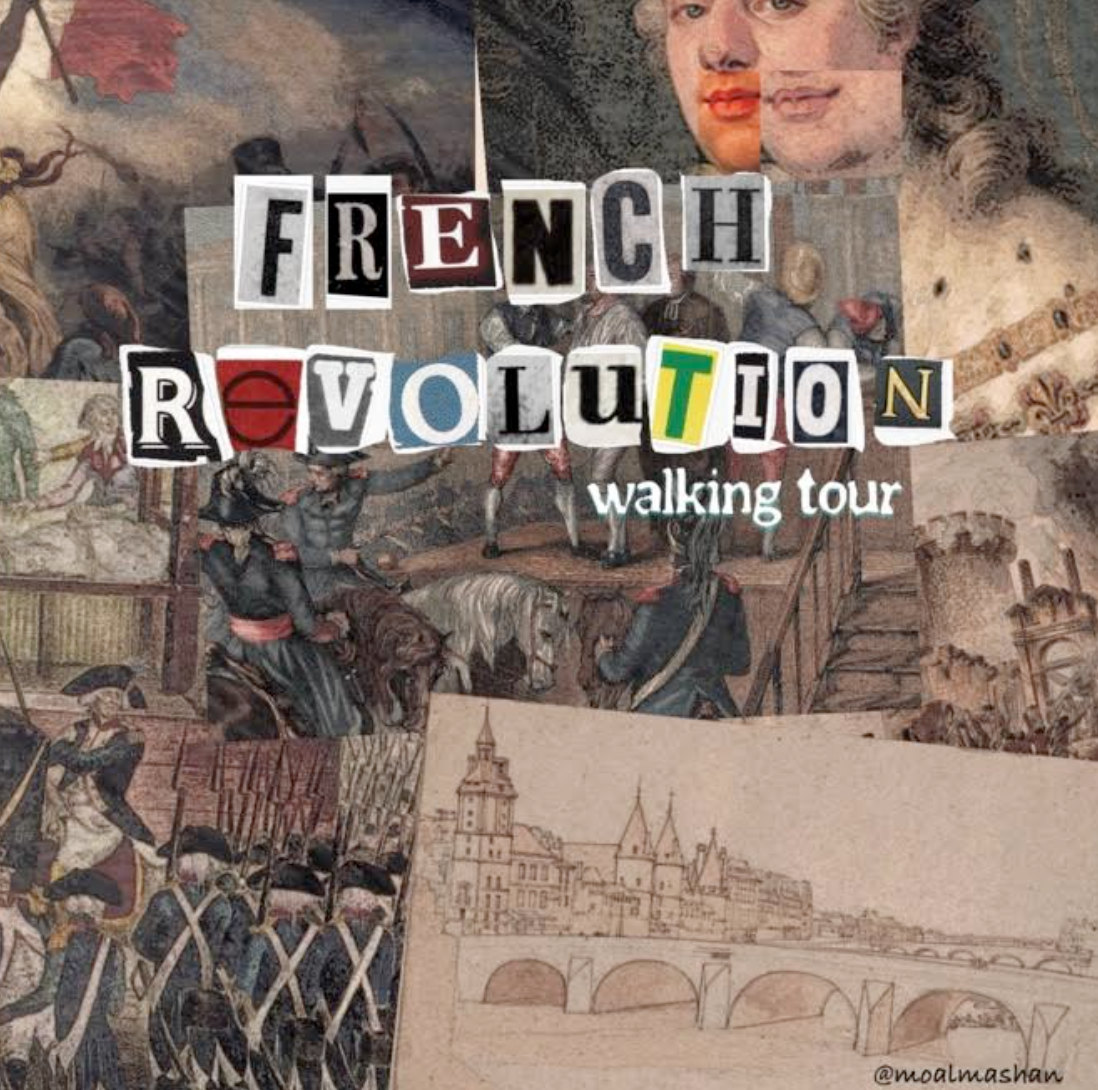 A group of podcasts was selected to be a part of the podcast available on Spotify. You can listen directly from the podcast here. If you'd rather stay inside and take the tour from your phone or computer, check out the Interactive Map using Google Earth. 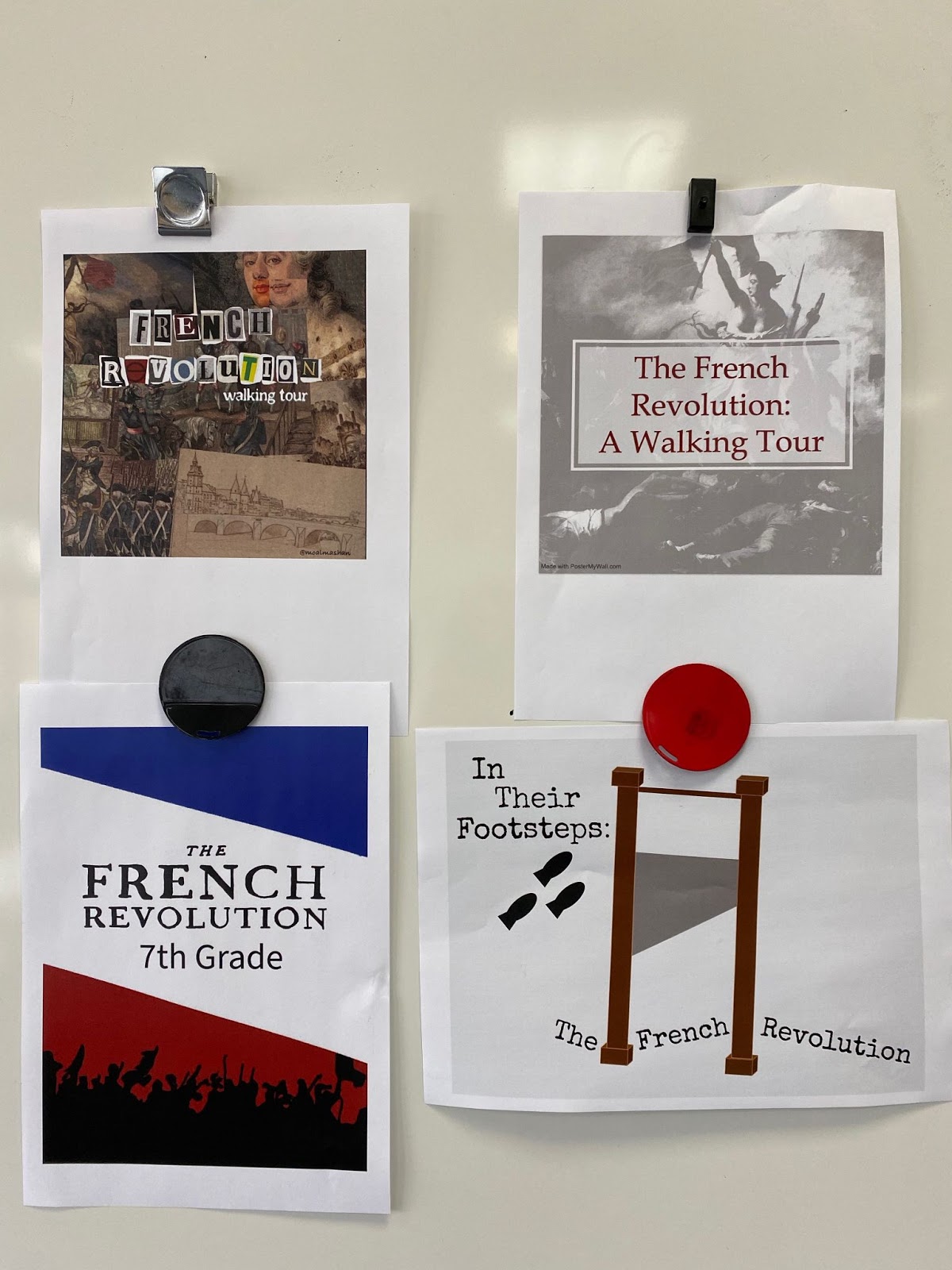 The walking tour starts at the Place de la Bastille and ends at Les Invalides. It takes approximately two hours to walk and covers about 5 kilometers.

You can check out each class's webpage with links to all the podcasts, interactive maps, and individual webpages.