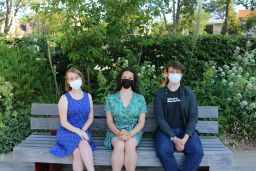 As our students returned to campus in August, Sofia M., Katie S., Benoit P., and Eileen W. reunited to take on the challenge of the year: produce the 2021 edition of INK Magazine in the most unusual of COVID-19 conditions.

Undeterred, the team began recruiting their fellow students to join the editing team, and started soliciting for fiction submissions and art submissions from students in Grades 9–12. Although they were concerned about how the health and safety measures, both on and off campus, would impact students' creativity, the submissions began rolling in.

"We saw a few themes, many of them were very dark, so we had to be careful with the balance of ASP's mission and the student population's well-being," commented Sofia, the Editor in Cheif. Benoit added that, especially as confinement began to lift, that "liberation from confinement was a big theme and all of the artwork was very original." Sofia noticed considerably more nature and natural themes in the art submissions, providing a sharp contrast to fiction focused on the confinement and on the uncertainty of the future.

The magazine is normally published exclusively in print, but after the success of last year's digital publication, the team knew from December 2020 that they would publish the 2021 edition digitally. "We knew from the start that we'd have to take a digital magazine into consideration, so we took all the visual submissions from a color perspective, because we were able to publish them in color instead of black and white. We tried to use color in a way that was different from the other years, we could really show the digital side. That's a silver lining [of publishing online.]"

In thinking about what they were most proud of about the last year, all three students had accomplishments to share. Sofia was delighted by, "the fact that the club continued; I didn't expect people to show up when we were meeting on Zoom, because it was so hard to get through Zoom classes [and then log on for a club meeting], but the club was never empty." Similarly, the student interest in submitting to the magazine was hugely gratifying: "We made it through all of the submissions and we got a LOT of them, which I didn't think was going to happen. Even without the opportunity for any in-person bonding, and even though nobody really knew who we were, we still managed to reach the community."

Benoit agreed, noting that, "we did a good job recruiting at the beginning of the year, even if everyone couldn't come to every meeting, we still had enough people for the editing process." Katie commented further, sharing that the group's "teamwork was a huge accomplishment!" She clarified that, "in the beginning of the year when we were trying to meet in person, we traded around who had responsibility for the meetings based on the shifting test schedules, club schedules, and whatever we had going on in our lives. We felt responsible enough and trusting enough to lead in each other's absence. We had enough communication to lead, and we knew where we were taking the magazine in the same direction."

Congratulations to the entire INK team for another incredible publication! You can read the 2021 edition, and take a look at the 2020 edition while you're at it! Below is a letter from Sofia, the 2021 Editor in Chief, that opens the 2021 publication. We hope you enjoy this incredible student achievement!

INK Magazine is formed by a dedicated community of students interested in the arts who work together to curate literary and visual submissions sent in by the ASP student body into a magazine. The result is a collection of the different perspectives that blend together to reveal the community's experience of the same year. This year, due to COVID-19 restrictions, almost all the club meetings were conducted online.

2021 was supposed to be the year in which we emerged from the ruins of 2020 to recover the happiness of pre-pandemic life. And although in summer we were able to glimpse what life after COVID-19 may be like, the autumn and winter quarantines plunged us back into an isolated existence. We were faced with the realities of the infamous "new normal", one where facemasks and virtual classes became the only way to hope the light at the end of the tunnel would approach faster.

The magazine structure parallels the pandemic's phases. After opening with a submission from 2019, where nothing could have prepared us for the coming year, two artworks produced in response to the outbreak of the pandemic begin the section recounting the first quarantine, where, despite fear and confusion, we collectively built hope and determination. The same section reflects our rediscovery of nature and break from the cyclical, pre-pandemic life before transitioning to the period where we realized the gravity of the virus and how long it would take to overcome it. In an interview with Zadie Smith, we discuss truth and emotion in today's media-focused society as well as the power of emotion in writing.
After this hopeful section, an illustration marks the beginning of the year's darkest times. Slowly, we transition from melancholy to nostalgia and finally self-acceptance and growth, two themes that reflect both the quarantine periods and the student body's coming of age. The magazine ends with the message that we must seize each day to live our life to the fullest. We must not waste away even in trying times, we must have the courage to pursue our ambitions the best we can.

I extend my gratitude to all who participated in the creation of this year's edition of INK: I thank the submitters for their creativity and vulnerability, Ms. Bruneau for her availability as our precious proofreader, and our supervisor, Mrs. Antoine, for her wisdom in overseeing this edition. Most of all, I wish to thank our devoted staff of editors, who even after spending the entire day in front of a computer came to the club meetings every week with enthusiasm. I could never have asked for a better team.
Thank you for your time.