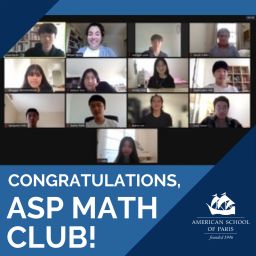 The 2021 American Math and ISMTF Competitions

On February 4, four ASP students participated in the American Math Competition (AMC) sponsored by the Mathematical Association of America (MAA). The MAA's American Mathematics Competitions (MAA AMC) program leads the US in strengthening the mathematical capabilities of the next generation of problem-solvers. The competition has grown to over 300,000 students participating annually, in over 6,000 schools.

Three of our Grade 10 students, and 1 Grade 9 students competed: Mrugaya B, Seongsu P., Sangyon H., and Celine L.. ASP is proud of all of their hard work, and their determination in the first round of competition!

Of the original group, Sangyeon made it to the second round of the American Math Competition. He was invited to move on to the next round of the competition, and on March 18, he sat for a very challenging, 15 question, 3-hour examination. The questions on the AIME are even more difficult than those in the first round. You can see examples of the sorts of questions that he faced on the exam.

Then, on March 27, our Senior teams sat for an intense round of competition led by the International Schools Mathematics Teacher Foundation. Dividing and conquering, Team 1 included Jihoon, Luca, and Arush, while Sang and Marco worked together as Team 2.

We have received the results of ASP's competition, and we are incredibly proud to report that Jihoon and Sang timed for 17th place out of 104 students in the individual competition. Working together, ASP scored in the top 20 schools out of all participating institutions!

Speaking on the results, math teacher and Math Club coordinator Ms. Baird said, "I am so impressed by our math warriors! The entire team should be SO PROUD to have worked together to be one of the top 20 teams. Jihoon has done an amazing job leading the club on a weekly basis and then leading the club to victory! And Sang has done a wonderful taking on the AIME II ( the second level of the AMC) and then persevering on his own during the ISMTF competition.

I feel so lucky just to organize the math club! Good job all around everyone!"

We couldn't have said it better ourselves, Megan! Well done to everyone, and congratulations to the Math Club for an incredible showing!